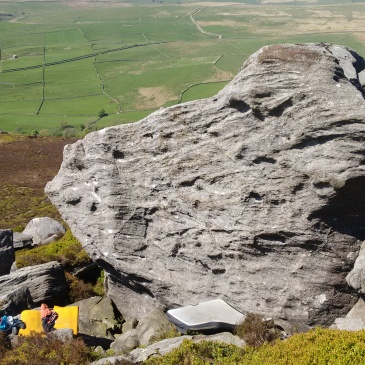 A jumble of boulders that are composed of good, silvery grit, set high on Simon’s Seat.  Problems have been done over the years but nothing recorded until now.  There are some very good boulder problems (and some that are really routes) ranging in height from diminutive to highball.  Landings are generally o.k. except where noted in the script – a couple of pads are recommended.  Though north-facing the problems are clean and dry quickly.  Easily combined with a visit to Dale Head Rocks, Lord’s Seat or Simon’s Seat.